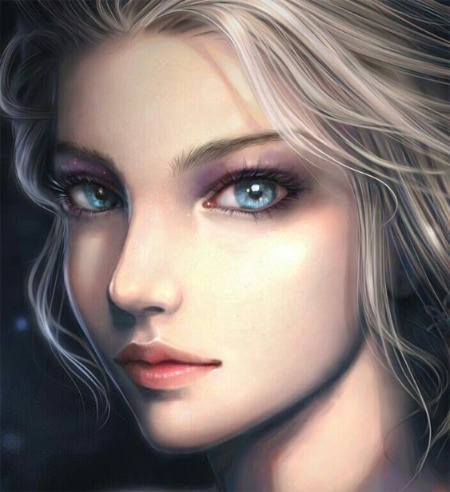 Flavia is sarcastic, cunning, and a deadly threat to anyone who has the privilege to cross in her path. In Flavia's mind, she is the best of all time at what she does, which is manipulating and killing. Due to her being an Naerikk. she has had to acquire a rough shell to deflect the instant judgement from the others. Flavia loves to feed off of fear of the inferior races, and uses it to her advantage every single time, whether that be to gain power, respect, or payment from her "clients". Mastering the power of seduction is one of her biggest aspirations in her life. She just loves how she can control the inferior, male or female, with her sheer beauty and lust.

Ruthless she may be, Flavia also has a softer side to her, which doesn't see the brink of day very often. Due to her childhood abuse, and being forced to praise a god who slaughtered her ancestors, she has spells of depression and PTSD. During these episodes, she finds seclusion in the slums of a city, or caves by a nearby mountainside. Flavia is also musical in her spare time, playing either the harp or the guitar. Music is important to Flavia, as it is one of the coping mechanisms to tame her demonic thoughts and chaotic soul. But that doesn't stop her from unleashing the hell inside of her.

Born in Augiery, Flavia was raised to believe that she was the one who would conquer the entire world for her "savior" Audrae. This tall task would then be beaten into Flavia throughout her entire childhood. This would be the reason why she had a large whip mark on her back. She had also been taught unarmed combat at a very early age, and eventually gotten her parents to stop beating her by taking both of them down. Everyone in her homeland always had a problem with her. Other Naerikk would tend to snicker as she would walk past, due to her larger stature. She had a companion who was another Naerikk, which is unheard of within Augiery. They would secretly embrace with each other every other night in the crop fields. Once this was discovered by the elders, her companion was butchered in front of her while she was restrained and forced to watch to remind her of what she was and what her purpose in this world was; Conquer. In an emotional flurry, Flavia gathered weapons and supplies and trekked across the southern continent to Desnind to find a ship to board, to escape to anywhere but Augiery and the southern continent. She spotted a beer merchant and overheard him talking to one of his crewmembers about how he couldn’t wait to get back to Rharne. She stormed up to the merchant and demanded that he take her with him. When he refused she simply threatened to gut him like a fish and where his skin as a coat. Shockingly, he obliged and she went on her voyage towards Rharne to raise some hell, and to conquer who knows what.