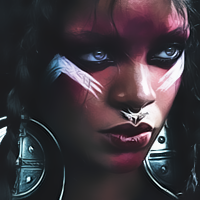 [columns=2]Height:
5'8"
Weight:
130lbs
Race:
Naerikk
Eye Color:
Green
Hair Color:
Black
Complexion:
Dark
Shape of Face:
Oval
Distinguishing features:
Tribal tattoo on right hand
Slave Brand (right shoulder)
Style of Dress:
Loose cotton and fur[/columns]
Nefere has always had a fascination with changing her look using colours and paints or by dressing up in different disguises to make herself seem more intimidating or fearsome, or even just to blend into a crowd, which she has had to work on more recently Ito be able to sneak into the city of Nashaki from time to time. She has never changed the colour of her hair, but does put it up in different styles, sometimes getting help from Nera. Nefere's eyes are a snakelike yellow-green in some lights, but can often appear blue when using the right face paints.
Personality
[columns=2]Mannerisms:
Looks down when she speaks.
Habits:
Stealing.
Health:
Excellent.
Hobbies:
Dancing.
Favourite Sayings:
My own law.
Communication:
Non-verbal gestures.
A woman of few words.
Disabilities:
A crippling fear of heights.
Style:
Reserved.
Greatest flaw:
Trust issues.
Best quality:
Loyal.[/columns]

Stubborn, stern, and suspicious of the world and all those who inhabit it, Nefere can often be difficult to read, rarely ever reacting emotionally to things. She doesn't often smile, especially not for strangers, and it is rare that one might ever see her cry. Inspired by her pet caracal, Nefere's movements often appear catlike, measured, and quick. She is working on her stealth and how to roll her weight onto the balls of her feet in order to move more silently. She doesn't trust easily but once a person has proven their loyalty and worthiness to Nefere, she will never let them down.
History
Nefere’s mother was captured by a group belonging to The Eternal Empire who were convinced that she was sent on a mission to spy on behalf of Audrae. Sold into servitude in the desert city of Nashaki, Imogen, who was with child at the time, gave birth a season later to a healthy baby girl she named Nefere, hoping that one day her child would strike fear into the hearts of the men who kept them enslaved for the next seven arcs.

Finally strong enough and having recovered from the abuse of her captors, Imogen used her Naerikk gift to cast her master’s world into darkness and escaped the house along with two other slaves, a woman and fellow sister with a daughter called Nera who was four arcs younger than Nefere, and a Human man by the name of Asil. Together they lay low and gathered supplies over the next season before embarking on a journey into the Hotlands, something none of them could have ever been prepared for.

Hunted like dogs and pushed to their limits, the trio was cornered one night and Imogen and her sister were slain in the battle that followed. Asil did his best to take care of the girls, teaching them about the desert and how to navigate via the sky, using suns, moons, and stars for guidance. The girls were inseparable and as they grew and the trade which had kept their mothers enslaved threatened to darken their door, the pair ran away, fleeing to the Hotlands just as their parents had where they still remain today.
Housing & Prized Possession
Deep within the Hotlands and far removed from the shadow of Nashaki City, Nefere and Nera stumbled upon a crack in the earth where they found a well hidden desert cave system and chose to call one of the tunnels home, living off the water from a small underground spring. Nefere has few things to decorate the cave with and make it appear a little homier, but she was glad to escape servitude with the gold nose-ring Asil had kept safe over the arcs, explaining that it had belonged to Imogen. Nefere never takes it out, even when trying her hand at different disguises.
Last edited by Nefere on Sat Apr 16, 2016 9:44 am, edited 18 times in total. word count: 775
Top Name: Nera. (naa-RAA)
Gender: Female.
Date of Birth: 78 Ashan 693 (age 23).
Skills: Melee Combat 30, stealth 30, Tracking 20, Hunting 20.
Appearance: 5'5" 115lbs, olive skin, dark hair and features, with a slave brand on the back of her right shoulder.
Personality: Nera is timid and often relies on Nefere in situations that make her uncomfortable, such as, large crowds, deep water, wild animal attacks, and anything the usual city dweller might consider dangerous. Nefere has often thought of the girl as being a little spineless, but knows that when the going gets tough, she can always count on Nera to do the right thing, including putting her life on the line if need be.
Relationship to PC: Childhood friends and current traveling companions.
Anything: Nera and Nefere are going to join a bandit gang of thieves.
word count: 149
Top
Post Reply Request an XP Review Claim Wealth Thread
6 posts • Page 1 of 1