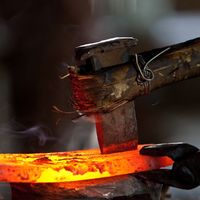 Appearance: Karth stands at about (6,6), and is very muscular with no hair on his body, He is left handed and one could pick him out of a crowd desiiy due to his height, lumbering gait and Greed tattoo embossed on his right hand, it is the symbol of his od military squad, "The Pruners".

Personality: Karth is a warm and open conversationalist, willing to talk about any subject save for one: His past. He possesses an overwhelming sense of honor, and an even greater temper to match. His favorite pastimes include reading, and working at the forge.

History: Karth grew up among a large extended family after his Parents were killed in a boarder dispute with a neighboring city. Apart from that dark incident Karth spent most of his childhood years playing around his Uncle's forge and learning the family trade of smithing. However this all came crashing down when the mercenary armies ,which roamed the land after some great defeat, attacked his homeland, and Karth and some childhood friends were drafted into military service. it was here that Karth fell into drinking, gambling, womanizing, and of course, killing. However his delirium came to an abrupt end when his cousins started dying on the battle field, and no matter how hard he tried Karth simply could not die. He would charge heavily guarded enemy fortifications but his comrades would always be there and follow/ guide him getting slaughtered till all but two from the original village remained. Karth and his dear friend Tyries. Tyries, disgusted by the monster that this war had become, spat on his oaths and deserted. At first earth condemned his friend for this decision but as more and more of those he cared about died around him he too realized that he was wrong. Eventually the war ended and Karth fled back home. Here with his aging Uncle he threw himself at the craft of forging. as his combat skills waned he discovered that he enjoyed creating more than destroying. Eventually a letter came from his Tyries asking for karth to come join him in the city of Hiladrith, in Western Idalos. A changed man, Karth shouldered his greataxe, smithing tools and renewed sense of hope. He now sets out on the long journey between continents to meet an old friend.

Housing: Karth currently has no stable housing as he is traveling. He plans to lodge with his cousin upon his arrival in Hiladrith.