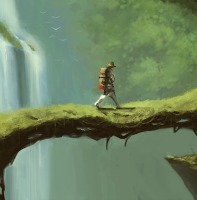 Partners:None
Appearance
Kes is still a young man, and his simple diet and lack of experience in combat leads to his build being shorter and skinnier than most men his age. However, his nomadic lifestyle does keep him strong, fit and healthy for the most part. His smaller build also allows him to be nimble and quick on his feet, which is good as he often prefers flight over fight when it comes to confrontations.

Being Yludih, when Kes was born he had to take the form of another race. As both his parents were Biqaj-form, he adopted their features. In this form he has tanned skin, pointed ears, a handsome, bright face and eyes that change colour, though a lot less frequently and more randomly than true Biqaj, usually remaining some pale shade of blue. This form also gives him his thick, dark, wavy hair and beard, both of which are perpetually messy.
[img]https://s-media-cache-ak0.pinimg.com/23 ... 0ed15a.jpg[/img]
When he was a teenager, Keseik spent an arc with a community of Aukari and managed to learn how to mimic their race too. In this form, his hair is straighter and neater than his Biqaj form, and instead of black, it's bright, flame-red. His eyes are a swirling mixture of gold and leaf green and his beard is similar to that of his Bajiq creation, only red. Aukari-Kes is
taller and more muscular than Biqaj-Kes, but oddly enough he prefers being the latter form as it suits his skills and personality better, as well as being a more accepted race. For all the hight and strength Kes may gain from his Aukari persona, he's still pretty lousy with a sword no matter what he looks like.

Growing up in a poor family meant that Kes never really owned nice clothes, and that didn't change when he grew up due to his occupation. He has one set of clothes: a loose white shirt, a worn leather waistcoat, a pair of deerskin trousers with a belt, two leather boots and a couple of head shawls of varying colour. His outfit also includes various pieces of simple jewellery he's purchased from different places around Ilados, one being a small blue hoop earing in his left ear.
Personality
Keseik's humble yet loving upbringing built him into a kind person who treats anyone he meets with friendliness and warmth. Growing up, Kes was always an outgoing and energetic kid, always cracking jokes and having adventures. This didn't changed much as he entered adulthood, drawing people in with his fun and extremely friendly persona. He has a bit of a way with words too, having the ability to make you laugh one moment and cry the next with the way he says things. He's not much of a poet, but he is a remarkable storyteller.

His charming personality and laid-back attitude, while entertaining some, aggravate others and his wise-cracking often gets him into trouble. Though he's often foolish, Kes isn't a fool, and uses his quick wits and nimble moves to keep himself out of the jailhouse or free of anyone's wrath. He'd make an excellent thief if he wasn't so kind-hearted.

When it comes to politics, Kes tries to distance himself from conflict and things like racial issues. When he's travelling, he treats everyone he meets with the same amount of respect and kindness, regardless of race, age or gender. If he sees a person with a clear advantage attacking someone vulnerable, he will rush to the vulnerable person's aid and try to help in any way he can to resolve the issue. That was part of the reason he chose a traveller's lifestyle in the first place: to escape the ongoing tensions and cruelty that take place between the races of Idalos and see the world for all its true wonder.

The best way to describe Keseik is he's just a big kid in the best possible way. He is energetic and adventurous, and loves to be the centre of attention, especially when telling a story or playing his fiddle. He get's into trouble one time too often, but always has a good heart and tries to make all those around him as happy as he can. His nature dictates that he care for each individual's problems and help in any way he can. He feels as if he was born to experience the world and all its people, and that's just what he intends to do.
History
Keseik was born to two Yludih who lived and raised their children in a secluded cottage on the coast of Western Idalos just a few miles out of Ne'haer. He was the first of two children, the second being his sister, Aika, who he loved and cared for like a proper big brother. While his parents where kind and loving, they were constantly concerned for their Kes and Aika's future as Yludih children, a race that is often under threat of persecution. Fortunately, the family was Biqaj-form and fit in perfectly with the Biqaj city of Ne'haer.

During his childhood, Kes spent a lot of time with real Biqaj people on their ships or in their marketplaces and made a lot of friends within the city and without. From them he learnt all kinds of skills, like navigation and tracking, and he loved to be part of their race. However, this pressure to fit in and look a certain way in order to do so was one of the few things Kes hated about his young life. All the hiding his family had to do because they were Yludih lead to his detached yet wary attitude when it came to race relations after he left home.

During Kes's teenage years, most of which he spent with his family in their house in Ne'haer, there were many conflicts in the city between the civilians and Aukari travellers, smugglers and/or immigrants. When he was twelve arcs old, an Aukari woman named Kymaura, who had been badly injured in a fight had fled from the city, found herself near exhaustion at the door of Kes and his family. Because of their kind nature and unprejudiced mindset, the family took her in and helped her recover from her injuries. During her stay, Kymaura developed a strong bond with the children and soon Kes began trying to concoct an Aukari form for himself, with little success. When she was well enough to leave, Kymaura offered to take Keseik with her so that he could continue developing his new form and train with an Yludih she knew of who had taken Aukari form for many years. Thirsty for adventure, Kes went to live in a small Aukari settlement of about 100 in the foothils of the mountains with Kymaura and her people. It was hard to fit in with the stern and aggressive Aukari, but Kes trained hard for one arc and soon was able to create an authentic Aukari version of himself. When the Aukari had warmed up to him, they taught him skills of their own, most of which were combat-related. Though he showed fair skill in archery, he was a laughing stock when it came to melee or unarmed. Regardless of his initial alienation, he soon became part the Aukari family, and found it hard to leave when it was time to return home.
When he did go back to his family, he dedicated a lot of his time to teaching his little sister Aika how to perfect an Aukari form.

As Keseik grew up, he found himself growing more and more restless with his situation. Most of his childhood friends had begun getting married and settling down, few of them leaving their childhood homes. But Kes wasn't interested in finding a wife; all he wanted to do was travel. Both his parents had been kind and loving in bringing both him and Aika up, and from them Kes had his skill with a violin and good moral compass and compassion. Growing up by the sea and on the outskirts of a great forest, Kes had also developed an understanding of the animals that lived there; their behaviour, their needs, which ones were dangerous, which ones could be befriended and how to befriend them. With these skills equipped, Kes decided to leave the island and journey to the Idalos mainland in search of real adventure.

After docking in Strosdyn, Kes was attacked in a back ally and forced onto a ship sailing for Athart. He soon realised he had been abducted by slave traders who put him and many others of all races in chains and stored them below deck like cattle. After fighting with some of the traders during the voyage, Kes was punished by being branded across the chest with a jagged X shape as punishment. To the traders, it seemed that this had broken the boy's spirit. But Keseik was just biding his time.

When they docked in Athart, Keseik was sold in an auction but managed to escape while being transported to his buyer's home. He ran for all he was worth until he reached the Hot Lands. Near death, Kes was lucky enough to be picked up by an old hermit who lived at the edge of the desert and who nursed him back to health. When he was well again, Keseik was ready to return home, find a wife, and never leave Ne'haer again, so traumatic had his experience been. The old hermit encouraged him to press on, saying that for all the evil in the world, it was far too wonderful to miss. After much consideration and rehabilitation, Kes was ready to continue with his journey. The hermit provided Kes with a young horse and sent him on his way. The scar on Kes's chest still remains, but he never tells anyone its true origin, instead making up some wonderful story to cover the truth, a story that changes each time it's told.

Still Keseik travels the world on the Hermit's horse. He makes a living off of his stories and his music, and dedicates a lot of his time to studying animal transformation, hoping to accomplish it for himself one day. He rarely thinks of home, but he does miss his family and plans to visit them again soon.
Knowledge & Skills