• Mature • Heart in the Hand 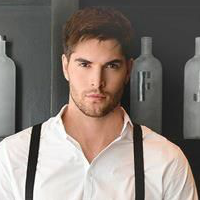 13th of Ashan, 716
It was quite the spectacle, what Qaerris had to do to keep his affairs with the widow, Evelyn Andaris, discrete. It had taken some time to convince the woman that his services would remain a secret, but once it had been established and a proper course of action was taken, it was simple enough for the harlot to find his stride in keeping the silence. First, the harlot was to shed his ordinary clothing, the rags of a servant donned as he navigated the property. Qaerris, each time, needed to avoid being seen by even other servants, the harlot taking advantage of the long shadows of the night as he raced through the property's garden. He'd twist his body and press himself to the wall of the property, finding with his fingertips a rope that the Lady of the house threw down to allow him access.

Gripping the rope tightly with each hand, Qaerris situated his feet against the wall, gripping tightly and adjusting said grip every few steps. Luckily he need only travel one floor, slipping into the open window and at last infiltrating the house. He threw himself inside with a sort of cat roll, though he was by no means acrobatic enough for it to be a smooth affair. Stumbling to the ground, the Mortalborn brushed the dirt from his shoulders, taking a right turn into the next hallway. He'd find his 'mistress' (for it was what she was once he entered the place) staring at her reflection in the mirror as he cracked the door. Taking a moment to admire the woman from afar, at last he made his presence known.

Qaerris did not cough or make his entrance so crass, instead allowing each footstep closer to the woman to be heard, an approach he treated rather carefully. Evelyn was a woman who did not much like to be distracted from what she was doing. The Mortalborn did not seek to, as a result, attract her attention. In any case, he need not distract anyone from anything at all. Once Qaerris' reflection set alongside Evelyn's, she knew he was here. He could see her gaze shift in her reflection, teeth clutching at the flesh of her lip as a hand moved to lightly sift through the woman's own hair. Qaerris watched the lady's actions, letting the charade of a grin cast upon his features. This was an orchestrated event, what Qaerris was asked by his lady to do each time he came to her.

Each time, she asks for the same charade? Does it need to be the same forever?

A breath pulled from the Mortalborn's lungs, taken from him in exhale before oxygen flooded his lungs once more. His body pressed onto the bed, his eyes closed as he let himself become comfortable. It was while the man's eyes were closed that he heard the shuffle of movement. His lady had taken flight... though where would she go? At times, when she was feeling aggressive, she would straddle him, intent on taking what she wanted from him. But this night seemed to not be the case. She was slower, her body falling beside his own. An arm hooked around the Mortalborn's waist as he felt Evelyn's body at last fall upon his own, the woman's breasts felt against his abdomen.

Lips pressed to Qaerris' cheek, and the harlot thought it best for him to at last 'wake' and face the woman who paid him to be with her. As the woman's chocolate brown eyes met his like-toned gaze, the harlot did not speak to his Lady, instead raising a hand to sift fingers through her hair. Lips moved to lay claim to the woman's own, a moan escaping from Evelyn's lips as the Mortalborn furthered the kiss, tongues entwining until at last he pulled away. For a time, without speaking, Qaerris and Evelyn had their conversation, the harlot taking messages from the woman's body, subtle pushes in a certain direction as hands heeded the silent commands. Qaerris found himself ridding the Andaris woman of her clothing, leaving her bared before him as slowly, she did the same to him.

When there was nothing at all separating Qaerris from his client, his job was at last to begin in earnest. Hands moved first to investigate each curve of the woman's form, moans leaving both his own and the lady's lips freely, tongues finding place on flesh. Teeth sunk into the harlot's flesh, a tongue trailing along the expanse of his collarbone, slowly lowering until no longer were the Andaris woman and the harlot tangled together. Kisses trailed along his chest, lowering further. A low groan parted the Mortalborn's lips, fingers gripping at bed sheets as the night progressed.
word count: 823
Top

As the night went on, time and time again the Andaris woman's moans would fill the room, hours passing as the moon danced along the sky of Rynmere. Each hour brought with it a mark upon the Mortalborn's flesh, bite marks present upon his flesh by the time him and the Lady were finished. It was nearing daylight when at last Evelyn deemed herself satisfied, heavy breathing set about the room.

It was very rare that Qaerris found himself challenged physically, his immortal ancestry bringing to him an allure and vitality to his being that made him particularly suited to his profession. However, this woman, he could see why she demanded satisfaction so regularly. A chuckle parted his lips as he found that Evelyn was studying him, the nude Mortalborn turning his face his client as he asked her,

"Is there a problem, mi'lady?"

Evelyn merely shook her head, her gaze set upon Qaerris for several moments longer before she answered him, "No, not a problem. However, the secrecy of this... It has me at an impasse. You clearly understand why I need this, Qaerris. But, what about others? Would they understand that one can't focus without release? My darling, when he was alive, understood full well... Yet, now, that he's gone, I fear exposure will end in poor taste..."

Eyebrows arched as he watched his lady, for the first time, express her doubts. Clearly, a woman of her refined nature cared deeply for how she was seen by the world. She cared because it mattered. Her position, her bloodline, the nature of her very existence hinged on her ability to keep her sense of self-control. Hiring a prostitute (or two? There was no reason to assume he was the only one) on a regular basis was her means of doing so. Qaerris often wondered how the late lord could handle such a woman, but in his absence, truly, Qaerris did not terribly mind filling in as his substitute. However, based on what the woman had just said, it was logical to presume that the late lord had known that she had taken on other lovers. Had he, as well? Was this particular branch of the Andaris line simply given to nymphomania? The question stuck clearly in his head, but rather than seek to have them answered, he was going to do his job.

Lips pressed first to the Andaris noble's neck, trailing lightly, almost consolingly, along the expanse of her flesh before he answered her, "Then why not bring it to light of your own accord? Why not take myself or whomever you deem fit to accompany you to a party? Surely, they will rejoice in your rejoining the flock of nobility rather than being taken into your work and your... personal life. Misgivings, my dear," With this, Qaerris' fingers moved to trail along the curves of his lady's form, settling lightly upon her breast before rising to caress her jawline, "Do not become a being as exquisite as yourself."

"Oh? Is this compassion I hear? From you, Qaerris? Last I heard you spend your evenings not spent with me toying with the hearts of any number of women who find the misfortune of crossing your path. It seems so strange for you to take an exception to this."

A nervous chuckle parted the harlot's lips, a charade dreamed up as he listened to her. Of course she wanted to feel that her information was accurate. And, of course, it was, to an extent. Qaerris truly did not feel sympathy for this woman who had all that she could ever want. But, he did understand her concerns, her urges. It was a plague that had settled upon Qaerris early in his life, when he had acted as the slave to another's whims. Forced to mate with his mistress on a regular basis, his young mind and body had attached itself to the practice. This, perhaps, was what Evelyn was experiencing now. And she feared rejection for it.

"Perhaps, my dear Evelyn, I've taken a liking to you, then. Who knows? Maybe there's more to you than a few nel thrown in my direction every evening."

The harlot winked at his client, taking her lips with his own. Fingers played at her flesh for but he did not seek to arouse the being. Trailing his fingertips along his lady's bare stomach, he pressed a last, chaste kiss upon her cheek before he told her, "However, I don't think, milady, that you want your admission to be at the hands of a servant. And thus... I will take my leave. I'll," he cut himself off, rising from the bed and beginning to find his clothing, "Be back soon, dear mistress."

Once Qaerris was dressed, he was gone.
word count: 818
Top Specialised Knowledge:
Evelyn Andaris: Knows how to keep a secret
Seduction: How to undress a woman
Seduction: Flattery will get you everywhere[/columns]