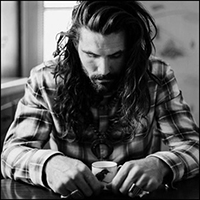 Arc 716, Cylus cycle, 30th Trial
A candle danced to a silent tune, letting a lazy trail of waxy smoke to waft up into the small room. Aun watched it move about as his head lay on the soft hay bed, the reflections of the light flickering on his brown, unblinking eyes. Sleep eluded him on this peaceful night. Gone were the sounds of the city. Gone were the birds that chirped and called one another. Gone were the customers that came to complain at the store. Gone were the mad cries of his Master, his teacher, his connection to his future, as he finally sleeps that night.

Aun turned to lay on his back, his lids blinking slowly.

'Sleep, why don't you come and take me away?' He thought in weariness. His mind would not stop racing with worried thoughts. His Master was slipping further into his state, with only glimpses into his former, stern, alert, all-knowing self. The rock in Aun's life, that he had hinged his entire future on, his entire enjoyment, had weathered thin, and began to crumble. He could not stop thinking of what he would do without his Master.

He remembered peering into the clay room some days ago. It was dimly lit by a lantern in the corner, illuminating a sheen of sweat on the balding head of his Master. Galai's eyes were glazed as he stared fixedly to the floor for what seemed an eternity. He would then blink out of it and continue working on the wheel of clay, finishing the orders of the day. Aun remembered, the sanity, where his Master would be so sure of everything, and Aun tried to forget the insanity, where it seemed another had taken his Master's place, where his face would dull and slacken and only nonsense would spout from his lips, or sometimes nothing at all.

Aun felt fear. Fear that the good things in his life were not going to last. He loved pottery and though there was a narrow possibility of securing another apprenticeship, an opportunity with a Master like Galai was almost once in a life time.

'You must hope.' Aun thought to himself. He propped himself up on his elbow, feeling slightly better with the renewed optimism. He tugged his hair from the side of his head and blew the candle out.

Sleep came to him immediately.

'AUN!' A ragged voice burst out. Aun leapt upwards, grabbing the intruder roughly with a left hand and the right hand bunching into a fist, ready to be thrown. 'It's your Master...' Galai wheezed.

Aun helped Galai sit on his bed while he found flint to ignite his candle. 'There is no time, boy-' Galai was overcome by a fit of coughing.

Aun placed the candle near the bedside table nearby. It illuminate Galai's face which seemed to give a sense of his alert state that seemed liable to disappear at any time.

'What about the Occult?' Aun head bent to and fro with the dizzied head of Galai, in an attempt to match his gaze.

'Galai?' Aun spoke loudly this time. 'When will they come?'

Aun looked to the side, his heart was thumping now and he could feel a tinge of warmness in his blood. Was it fear? Did he fear the Occult? If they end Galai because their secrets are compromised, then what of him? What if they suspected he were privy to these 'secrets'. The Occult were ruthless and they would not flinch to end them both, especially with his own family history of defection.

'We must leave.' Aun said finally, making up his mind.

'I haven't finished my pots, my order isn't finished.' Galai began to mumble to himself as he descended back into usual state.

Aun peered out of his half open door, peering into the blackness of night. The night sky was peppered with a million stars that pulsed and twinkled almost knowingly of his situation, as if they approved of the finality of this decision. He laid Galai down, who began fidgeting with his hands and muttering away. Aun changed into his usual clothes, still damp from being washed the day earlier. In a small sack he found in Galai's workshop, he put his belongings. Some gold stored in the shop's coffers was thrown in the sack with the rest.

'We have to go and collect some supplies, Master.' Aun lied as they left through the front of the shop and began to walk along the city streets. Patrols were always out at night but Aun had lived in Sirothelle all of his life and was aware of its layout. He took to the small streets where he hoped the patrols would not tread. The night was crisp in the Cylus and only a soft breeze brushed the duo's hair as they staggered through street after street. The lights of the city were absent, with the city mostly asleep and so darkness hid them well.

Many times, Galai refused to walk, or would mutter aloud he did not wish to go that way, or his knees would crumple with weakness, and each time Aun would coax his Master quietly, helping him along and even attempted to half carry him along. They both grew tired now as they approached the periphery of the city as the city walls loomed beyond like a line of black silloutted on the star covered sky.

'Dawn will come soon.' Aun whispered. The very word 'dawn' struck fear with him, the fiery ball that was the sun, was like Faldrun and the Occult that would come for them. As they moved forward, Galai began to resist and as Aun was about to lift him, he was met with a stern voice.

'No more, Aun. I cannot go on.' Galai's voice, in the darkness had that sense of alertness that returned.

'I will carry you!' Aun began to grab Galai.

'No. I cannot continue onward.' He softly unhanded Aun from him. Aun felt the unnatural heat of his Master's hand. 'My journey ends here.' Galai body began to glow softly and he looked about himself with a peaceful smile. A tear had streaked his cheek and evaporated as quickly as it came.

Aun slowly shook his head, stunned at his Master's glow. Galai sat down on the side of the road stiffly and crossed his legs. Aun crumpled down before him.

'I think clearly now, Aun. So very clearly.' He huffed a slight chuckle to himself. Aun stared as if he were in a dream. Galai looked directly into Aun's eyes. 'You remind me of my son you know. He died because I didn't protect him well enough. When you came, I did not want to teach you at first because I did not want to feel...that hurt again. Yet, I admitted you. I am sorry that I came off as a harsh Master.'

Aun merely watched, his mind flashing images of working with pottery in the workshop.

'I know things that the Occult will have me killed for. I used to be highly regarded by them, the Occult, you know, but I became a potter. If they find me in this state of madness, they will kill me and those I associate with. I cannot let you follow the same fate as my son.' Galai bunched his eyes together. 'I betrayed my own son to the Occult.' His voice cracked. The glow of his body began to increase as a flame slowly rose over his body. 'I betrayed him.'

'No, no, no, no..' Aun scrambled to the sack, emptying the contents of his sack and grabbed his waterskin. He cast its watery contents but it did little to extinguish the flames, which by this time had now completely engulfed Galai.

'Aun...I know one thing...that the Occult does not.. about your father.' His clothes burned away and his skin began to blacken as Galai gritted his teeth, his eyes closed, in agony. '...he lives.' He said finally before slumping over, the flames converting his body into a charred black. The fire raged about his blackening body and furled about in the wind that had picked up in force. Smoke rose upward to the stars that watched, mutely.

Aun watched helplessly, the waterskin slipping from his frozen hands and falling onto the ground. Suddenly, still on his knees, Aun clawed at the cobbled path and buried his head in his arms, letting out a muffled sob. He hated the Occult and the fear they laid onto their people. He hated that they were told what to think and what to do and the result of it all, was only tragedy.

But that would change.

Awarded Knowledge
Extras
Comments
Loved the plot twist o: though it feels like you peaked so early… I never even got the chance to meet Aun before all this happened and now all the big stuff is going on. Would have been nice to see more of what he was all about before this.

However this was exceedingly well written, completely captivating. I wanted there to be more! I hope we get to see where Aun goes on his adventures. I really like this spin on being a renegade.

As you can see, I have provided feedback and reasoning behind my review. If you have any questions, comments or criticism about your review, feel free to send me a PM and we can discuss it.
[/color]
word count: 188