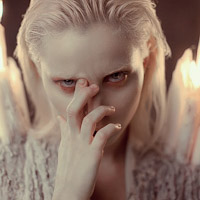 Mara Galamore
Name: Mara Galamore
Age: Twenty-three
Race: Mixed-race - Human / Eidisi
Height: 6'2"
Weight: 164
DOB: 13th of Ashan - 695 Arc
Appearance
With skin like porcelain and hair flowing like liquid platinum, Mara comes across as more inhuman than her heritage would have you believe. A network of shockingly bright scars lattice their way down her left shoulder, across her breast, and finish at the wrist of her left arm. Her eyes are a glowering grey and can usually be caught staring daggers into people's backs. She towers over most other women and men and tends to take her height as a point of pride. Preferring to shroud herself in tight fitting garb, Mara shirks bright colors and audacious displays of vanity, preferring simple, cheap, threads with pale tones. Some would call her frigid or intense to the point of uncomfortably unsocial. In truth the mixed woman simply accepts her role as an outcast, embracing neither her Eidisi or Human blood, and instead preferring the mantle of something else entirely.
Psychology

Mara is caught in a vicious war within herself, with neither side offering peace until their various demands have been met. Voracious in her appetite for knowledge, she is consistently buried within work. There is no book that can sate her pride and no accomplishment that will ever be enough. She is driven purely by an insatiable lust for more. Greater skills must be attained, new boundaries must be pushed. If it exists and can be expanded upon, every fiber of her being will yearn to see how far she can take it. Mara is a scholar in the pursuit of academic perfection, and ultimately recognizes that while such a lofty goal is impossible to achieve, it won't stop her from trying. She wants to break old molds and achieve feats the likes of which elicit shock and awe.

On the other hand she yearns, dearly, for recognition and companionship. What good is brilliance and accomplishment after all if there is no-one to share in your joy? While her penchant for isolated study tends to leave Mara peculiar in her methodology of communicating with others, sometimes to the point of blatant, awkward, jabbering, she really is a warm individual at heart and craves friendship in all forms. What she lacks in bravado and social grace she makes up for in intrigue and sheer practicality, often compelled to reward those who give her the time of day with little gifts and small acts of devotion as a self-interested way of demonstrating her appreciation.
History

An educated childhood led to Mara's initiation into the world of the scholar. From a young age the girl displayed an alarming aptitude for the written word, harvesting it like a greedy farmer over a field of wheat. The very act of feeding herself new knowledge and information seemed to bring herself a sort of self-satisfaction usually reserved for much grander endeavors and accomplishments. As a result neither her family nor her studies seemed to ever be able to keep up with the mixed-blooded youth. Any attempts at special curriculums or private tutelage usually ended abruptly, with instructors leaving the interactions flustered and dismayed at the intense lines of questioning coming from a little girl.

Finding no respite in her seniors, Mara instead turned to the Prime Atheneum, spending arcs-worth of her free time buried in various tomes and dusty books seeking new founts of education. It was here, mostly, that the foundation for her character was built, wrapped within an almost holy reverance for the library. She found a particular keen interest in chemistry and the theories and ideas behind the field of study. Nothing tickled the little synapses in her brain like understanding the very building blocks of reality, and it was with an incredible depth of concentration that the youth was able to comprehend and begin to dabble in the art. It began simply enough with the collection of biological material. She would press various articles of flora between pages, and study the way they dried over time, while simultaneously researching on her own time the chemical reactions occurring. Queer in it's general nature as a hobby, it became a consistent habit, the very act a sort of religious ritual for Mara. Every piece of decaying nature taught her something new. Certain foliage pressed together would bring out various forms of decay not seen when sealed alone, while some plant life seemingly didn't wither at all, instead becoming brittle and crumbling to dust.

Soon after as a natural progression she turned to greater forms of study. Blending her studies with anatomy and medicine, she discovered her first brush with the world of biological chemistry beyond petty pieces of nature. Dissection became commonplace, her own private quarters littered with various insects and small mammals Mara had discovered frozen or lying dead in the streets; much to the chagrin of her parents. Drying the corpses and pulling them apart with a morbid sense of fascination, she would cross reference her delicate administrations with textbooks, attempting to replicate the illustrations within so as to further her own personal understanding of the little critters she was slicing open.

It wasn't until she came of age that she found herself discontent merely with study. Mara had evolved over time into a creature of such desire that mere books no longer held the same satisfaction they used to. Her wanton need for knowledge had become something of an addiction, and her questions so specific that oftentimes an answer could elude her for several trials until she'd located the specific tome she needed to find her solution. Such a critical dilemna was this for Mara that she began to, unbeknownst to herself, dip into the world of alchemy.

The combination of medicine, philtering, anatomical study, as well as basic chemistry had paid off on its own. In an almost idiot-savant moment of mischeviousness, Mara unwittingly created an accelerant wrought from a form of dried mushroom she had found to be particularly flamable. Her unveiling of aptitude wasn't discovered by the process of turning it into a powder, however, nor when she mixed it with a mold she had found that seemed to slow the initial ignition process. It was only when her father witnessed the young woman, in a rare fit of excitement, rush over to his desk to set down a glass jar and asked him to tap the edge of the bottle. He did as requested, and as the trills ticked by, beheld a small green flame suddenly sprout up within and light the surrounding area unfailingly for a full thirty bits.

It was in a very small home, on a roughly hewn wooden table that the legacy and eternal obsession of the alchemist known as Mara Galamore began.
Housing
Four-hundred square feet of pure minimalist design, Mara's quarters features an immaculately clean space containing one perpetually made bed, with white linens devoid of dust or stain. It lies snugly against the north-western wall. Her clothing can be found folded neatly across the wooden table set up in the center of the room, sided by two plain wooden chairs. Six assorted platterware and two knives are set on the left side of the tabletop, cleaned and polished for convenient usage. Various thick books containing her notes and pieces of work are stacked along two shelves across the western wall, along with an inkwell and a simple dip pen. Two windows are set beside the southern door, with dark curtains hanging over each. One single fireplace can be found along with a hearth set within the east wall. The outside of her home is mostly recognizable by its stone simplicity, carved purely out of a natural formation.
Equipment
One red cloak
A white blouse and pants
Undergarments
Boots
One Set of Toiletries: Soap, a brush, razor, toothbrush, and toothpaste.
One waterskin
Two sets of eating utensils
Tinderbox
Knowledge & Skills
Fast Track: Research (Human FastTrack)
(SP) 10 Chemistry
(SP) 10 Medicine
(SP) 10 Physics
(SP) 10 Mathematics
(SP) 10 Alchemy
(RB) 25 Research
Language
Common (Fluent)
Ledger
100 gn (SP)
Thread List
Last edited by Mara Galamore on Sat Mar 31, 2018 8:32 am, edited 2 times in total. word count: 1372
Top