• Solo • Not So Friendly Neighbors

Not So Friendly Neighbors Arc 718, 29th of Cylus
The stall Rynata had inherited in the Almund Bazaar was a little worse for wear. The tarp overhead was fraying and loosing its color while the planks making up the counter were brittle and splintering. To top it off the whole thing was coated with snow and dust, though she imagined the dust came first. It would take some fixing up if she even wanted the right to call it quaint. Perhaps a new roof cover and sanding for the wood.

Still, it was backed against a building in one of the narrow alleyways and its position meant that it was difficult for the wind to get at her. The shade made it chilly but that also meant that in the hotter seasons, it would be shielded from the sun. Shaking the worst of the snow from the tarp, Rynata set about putting the place back into order, doing what little she could right now and taking note of any purchases she might need to make it this stall were to be presentable. Across the small street was another run down stall with a lone vendor. She got the feeling the other merchant's eyes were trained on her even with her back turned. What was that they said about eyes boring holes? Well, even if it was a bit rude to stare perhaps it was also inappropriate to go so long without initiating an introduction. After all, they were neighbors of a sort and in a way, competitors. Turning around and catching the man's eye, she began raising a hand in greeting only to have him scowl at her.

"Mind your own business, Biqaj."

From his tone, the statement was equally both threat and actual warning, as if the other was just as wary of her as she should be of him. Now that she looked at his wares more closely, they were a mismatched assortment of small pouches and bottles. There seemed to be more wares behind him than out on the counter and the mistrusting looks he kept sending her way told her that he was expecting a more exclusive clientele.

Right, then. She knew the bazaar saw its fair share of shady business, but to quite literally walk into one by accident was another thing. Still, Jacien probably knew and if he wasn't doing anything about it, the stall probably had his unspoken blessing. It wasn't like the Elements would do anything about it. Not if they had been subjected to a similar interview with the Master of the Bazaar as she had been. That man had a way to ensure even the black market operated accordingly in his domain.

Well, as long as no one got hurt, she thought, internally wrinkling her nose. While she wouldn't touch the contents of those tiny bottles with masterwork hide gloves, ultimately the commodities people bought for themselves were out of her hands. Shrugging, she turned away from the vendor once more, choosing to occupy herself with trying to fix a wobbly leg on the table. However, as she crouched down to see if a pebble or two could prop up the uncooperative leg, she heard footsteps enter the alley and rapidly approach the collection of stands. They didn't sound like a window shopper who'd wandered in to see if there was anything interesting for sale but someone who walked quickly and with a purpose. Peaking around the stall, Rynata caught sight of another man hailing the vendor from before. This one was quite a few arcs younger than the first and moved with a quiet confidence in each step. Seeing as he wasn't chased away as she had been, the two were at least acquainted.

"We've got a problem, Whitler," he said as he reached the counter.

"What now?" The man addressed as Whitler growled through his teeth looking anxious.

"Filliman wants us out and back at the base. Says we need to work out the new plan."

Rynata found herself holding her breath under the counter. That "Filliman" wasn't just any coincidence was it? She had given up looking for the journal's owner, dismissing it as a curiosity not worth the risk. Now however, it had once again sailed right into her arms.

"Wasn't that supposed to be much later? We've still got shipments." Whitler glanced from side to side looking impatient.

"With the Elements as it is, I guess he thinks better sooner than later. He'll be expecting us to head out as soon as the weather clears." The man leaned in and lowered his tone so that Rynata also had to inch forward to catch the traces of his next words. "...have to deal with that Sev'ryn rat. ... Been...too much trouble lately. ... wants 'im gone."

Wonderful. Someone had to be kidding. Was it just her or did that sound worryingly threatening. Rynata's first thought was the Elements, but then again, this was the Bazaar and she remembered the pointed lack of island guards the first time they were needed earlier in the cycle. The worst case scenario spelled out that she would be the one in trouble if she ran to the authorities. Still she'd never be able to leave this be if someone were in trouble. Always so nosy. A blessing, she had often called it. A curse, her family had chided. It just had to be like this whenever someone needed help, didn't it.

"Fine, fine. That'll give me a few more days at least," Whitler rolled his eyes and waved away the other man.

"I'll see you there then, don't be late." Quickly retracing his footsteps the younger man disappeared around the corner. Meanwhile, Whitler turned his back to the alleyway, still in a foul mood as he sorted through his stock muttering to himself. If she was going to do something, Rynata had about seconds to decide.

Ducking out from behind her cover, she burst around the corner and nearly ran into a passing shopper. Breaking her momentum with her toes but still slipping in the snowy street, Rynata had to perform an odd sort of leap around the figure to avoid colliding.

"Sorry! Sorry!" she hissed hurriedly to the bemused looking passerby and scanned the sparse crowd for the earlier man. There was no sign of him but there was no way he could disappear so quickly. Speeding along the street, Rynata whipped her head toward each side street as passed. She wasn't managing much discretion and she hoped that the man didn't have any more companions. As she passed one nearly empty side street, however, she glimpsed the man striding down to the other end. Slowing down a little, Rynata wavered at the street entrance. Following directly was certainly the easiest way to go about things, but not necessarily the safest for her. She didn't have the stomach to go strolling after the man so obviously as to enter a deserted street. Eyeing his next direction until he rounded the corner, Rynata took off after him along the main street hoping to catch him again as he reappeared.

She now understood why the man had opted to take the long way around. Even with the cold weather, the main street was clogged with merchant stands, vendors, shoppers, and merchandise alike. Weaving through the limited space bumping shoulders with strangers, Rynata hurriedly reached the next turn. Luckily the man was also just emerging, heading down into the quieter side of the city. Keeping a good distance between them, she wandered after, trying to look absorbed in her own matters. Following for a while, she realized that the noise of the bazaar had already died down and that the buildings were beginning to look smaller and dirtier. The streets itself were no better. With increasing frequency she passed people who were not doing to well for themselves, strangers with shifty eyes, or both.

Catching sight of the man entering a landmark building on the street corner, Rynata crossed the street to get closer, flicking her eye to the sign that hung at the front. The likeness of a blue gem. Unsure of what to do next, she lingered on the corner, leaning against the side of the building. There were slightly more people here, which was a relief because she could blend in. The building had a fair bit of traffic. As people marched in and out, the door swung open to spill sounds of music and conversation. So, a restaurant? Tavern? It could be where the man was lodging. Fantastic. She'd followed this potentially dangerous man to this side of town, but now what? She couldn't just walk in, find him, and ask what was going on. What she knew, what she knew... Filliman wanted "them out and back at base". That meant the men were leaving. To where? Filliman had written the smuggling operation he had joined had been in Egilrun. Of course that could be old information. Still, she would say it was a safe bet that the men planned to leave Almund. They had been concerned about the weather after all, and in the end, that was something she had also been waiting to clear for a long time. 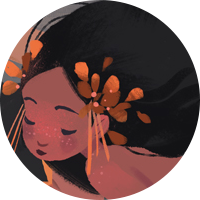 Not So Friendly Neighbors

Your review is ready!
Well-written little solo. I love the interaction and dialogue between the NPCs!
Rynata

XP:
10 | These points cannot be used for magic.

Other Knowledge:
Whitler: Shady salesman
Location: Almund, The Scalvoris Sapphire Inn
If you've got a question or concern or if I've missed anything, don't hesitate to PM me!

Now that your review is complete,
don’t forget go back to your review post here and drop this image in!
Reviewed By