The Skadiri are a small, elite sect of the Ragnari--Lucia wants to join them, but she has to show she's worth giving a shot.

The cities and villages of Melrath are as varied and diverse as they come. The capital of Raelia is the the jewel of this western kingdom, playing host to a merchants, artisans, Aesir priests, as well as a cut throat political landscape dominated by the nobles of Raelia. To the south in the depths of the Myrkvior Forest lies Melrath's second largest, and oldest city, Fensalir. Here people have learned to live alongside spirits and the natural world by maintaining their loyalty to traditions laid down the first Melrathi. To the east lies the small fishing village of Noatun, and to the western mountains rests the Mer city of Verimeer, the brewing town of Alivilda and the alpine village Vormund. 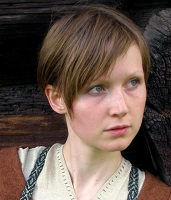 "So you want to join the Skadiri." The man studying Lucia deadpanned, eying her skeptically. And, truth be told, he was right to be skeptical. At sixteen, she was about the right age for recruitment...but she was a slip of a girl, neither strong nor quick nor dangerous in any way. Even her Spark would do little to help her in combat. Everyone who saw her knew she didn't fit in here, in this tower of shadows and creeping dread. The man stood with a few others, each on bearing the tattoos that indicated initiation and rank within this secretive branch of the Ragnari. She'd simply come up and asked him about joining; it had been what she'd been told to do, when she had asked a Skadiri in Fensalir. They were few in her neck of the woods, but the Skadiri could be found everywhere in Melrath.

The girl had only recently made up her mind to join their ranks. It was almost impulsive, but...not really. More that she realized the possibility only after running into that Skadiri. The man had handled an impending brawl with only a few words and a stern look. Four big men had been about to go at one another's throats over some issue or another, and Lucia didn't need to be Attuned to know that the Note of tension was probably humming deep, deep within them. Instead of letting it happen, beating them into shape, or calling them out...The Skadiri had simply showed up, showed them his Embla, then told them to disperse. What was more, they'd done it without complaint. That was the kind of power Lucia wanted. And she did want the power. The teen was honest enough with herself to know that she wanted the ability to make people step carefully around her. That wasn't all, though; she'd realized the potential such power could have. Lucia could help people; she could protect them. Though she loved her people, she knew they were not perfect. Children were beaten, people were killed, bad things happened every day all over Melrath. She'd always wanted to use her magic to make a difference (that was the essence of magic, really), and it became glaringly obvious that joining the Ragnari was the best way to go about it.

"What can you do?" He asked. Lucia studied the man for a few moments; he was big, dwarfing her and even some of the Skadiri. Before she could reply, however, another of them spoke up.

"Jorgen, don't play with the girl. You see her eyes." It was a woman who looked to be in her late thirties, dark of hair and complexion with hawk's eyes that made Lucia quail a bit.

"If that's all she has, then she should have gone to the Syn," replied the man gruffly. Then, looking back to Lucia, he added, "Why aren't you talking to one of the Syn right now?"

"I don't want to sit inside and read books all day," Lucia replied, trying to look as sure of herself as these two...and failing completely. Still, they were gracious enough to pretend not to notice. "I want to help people."

That got a few chuckles from the group, and the woman picked up where the man left off, "A difference? You've come to the right place. We are the Skadiri, child. We change the course of nations on the order of the Unseen Ones, to make Melrath stronger." Here, she stepped closer to Lucia, circling around behind her. Lucia knew better than to turn around and watch her. "Tell me..." She murmured cooly, "What would you do for your people?"

Lucia was momentarily lost for words, but quickly came up with the response she knew was best. "Anything."

"For the spirits?" The man added, as if on cue. He studied her closely, obviously judging both her response and who she was as a whole.

This time, the answer was ready on her lips. "Anything." And she knew that she meant this second one. Lucia felt herself close to the spirits of the land, and truly did value them. She was one of the relative few who risked direct communion with the spirits--such as it was--without the mediation of the Aesir. It was not the safest way to worship, but Lucia couldn't help but feel like Aesir-led worship was lacking.

"Then hit me." The woman again, directly in front of Lucia. She stared down at the teen with those hawk-like eyes, as if sizing up her next meal.

That caught Lucia off guard. She stared blankly at the woman, who waited impatiently without saying a word. One of her eyebrows was raised, as if to ask, Does "anything" include striking a member of the Skadiri? Under other circumstances, of course, Lucia knew that this was a monumentally stupid idea. The Skadiri were some of the most dangerous people in all of Melrath; their unshakeable loyalty to their people was the only reason they weren't universally feared. ...Or, at least, that they were feared and respected rather than just feared.

Steeling herself, Lucia balled up her fist, reeled back, and threw a haymaker straight at the woman's jaw. The woman didn't move until the last instant, and then suddenly Lucia found herself lying on her back with the wind knocked out of her. She lay staring up at amused Skadiri, along with the woman who had ordered the teen to strike her. "Again," was all she said.

After a few trills, Lucia managed to haul herself up to her feet. Setting herself, she locked eyes with the Skadiri and tried again. This time, she managed to keep her breath in as she slammed into the ground. Up again, and then down again. The third time, she cracked her head on the stone floor and it took her a bit or two to stagger up to her feet. The woman was staring at Lucia now, her lips drawn into a tight line. "I said hit me, girl. You said you'd do anything for your people. If you want to join the Skadiri, you need to be willing to give everything for Melrath." Oddly, the Skadiri around Lucia were all staring soberly. No amusement this time, just watching in deathly silence. The only movement aside from Lucia was from the eerie shadows in the corners.

Lucia, still seeing stars, tried again. This time, she let out a little whimper in anticipation of the hit that was to follow. And this time, Lucia found herself allowed to follow the strike through. There was only air where she expected flesh, and she fell forward onto her knees. The loose dress she wore--she only really had dresses, unfortunately--did nothing to prevent her from skinning her knees on the stone, and only ripped the dress. The younger woman's hands balled into fists, and she lunged toward the older woman without bothering to get up. By now she was starting to get angry. The woman was playing with her, mocking her for the amusement of the other Skadiri. That was what this was! Now, she was starting to want to hit the woman on principle.

"Hit. Me." The woman stared down icily at the girl, having danced back out of reach with ease. Lucia's body was starting to ache from the beating she was taking. It was easily the worst one of her life; her father had never struck her, and she'd never suffered any serious injury. This wasn't serious, but she knew she'd be bruised all over by the morning.

"How?" Lucia snapped back, glaring at the woman. "You're a Skadiri. I've never hit anybody in my life! How am I supposed to hit you?" And, just then, she lunged once more. This time, she felt the merest brush of fabric from the woman's pant leg before it got out of reach. Of course, she got a light kick in the ribs for her trouble.

Here, the woman actually smiled. "Lesson one," she said, "Approach your target when they aren't expecting it." The smile vanished, and she continued, "Lesson two. Do not be stupid enough to attack a more skilled enemy when they are expecting you. You will kill for your homeland, not die for it." Here, she glanced at one of the lower-ranking members and said, "Take her to the dormitories. She'll be in my group. And get her some clothes that won't make her even more useless."

And, with that, Lucia found herself a (provisional) member of the Skadiri. She was settled into a bunk among several other recruits, given a set of clothes, and set loose to fend for herself. Training would begin at dawn.
word count: 1495
Top
Post Reply
1 post • Page 1 of 1