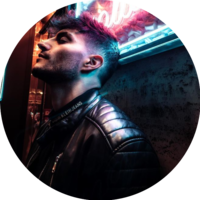 Buskerfest: A Fated Encounter or Misfortune?

Vincent closed his eyes and took a deep breath of the cool and crisp morning air.

"Buskerfest, huh?" he mumbled to himself. "……..time for some sightseeing…….." he paused as his nose picked up a familiar scent.

"Ah, there's nothing better than a cup of Old Joe's coffee in the morning." He jogged slowly toward the small group of people huddled near one of the warehouses facing the water.

"Yo Joe, what's new?" He waved and greeted the older man.

"The usual….." Joe grunted. "……young people nowadays, always taking their sweet time." Joe lifted his hand and made a cursing gesture. "Bah, they should have been here yesterday……… It's the start of the buskerfest…….." Joe paused, coughed and spitted on the ground.

"No wonder you look older. Those frowns man. You gotta chill and take a breather."

Old Joe scoffed at Vincent's advice. "Baahhhh, you're one to talk." He lifted the cezve he was holding and pointed it at Vincent. "Remember, my costumers, off limits."

Vincent lifted both of his hands. "Yeah, yeah, I know." Vincent laughed. "Being a regular of yours isn't a privilege that I want to lose."
Joe stared at Vincent for a few more trills before grunting and placing the cezve back on the sand pot.

Vincent took out the piece of cigarette that he had tucked in his ears and lit it. Then, out of habit, he grabbed two loaded dice from his pockets and juggled them with his left hand.

It's been almost more than two cycles, huh. If only Leon and Crow were here, I could expand my operation faster. Now I'm stuck with that Gustav guy and his cronies. To pull off a unique and original crime, huh? Now that's a bit hard, but I've got ideas. And I need at least three to five people to start working on it. I can't pull it off alone. The Shadow Quarter, huh. They sure have a lot of eyes and ears around the city. He thought to himself as he blew a cloud of smoke and looked at the approaching ship.

Original and unique. Stealing something valuable? It's the bread-and-butter in our line of work.

"What the f….." Vincent turned around and felt a light smack on the back of his head. "With that attitude of yours, no one is coming to your funeral." He cursed.

"Don't care, won't be alive to see who will attend anyway." Joe replied. "You going deaf or something boy? I've been calling you for five times." He grumbled.

"Jeez, a light tap on the shoulder should work just as fine."

"Yeah, I'll tap your shoulder with a hot cezve next time." Joe scoffed as he handed the cup of coffee to Vincent.

Vincent flicked the burnt cigarette to the ground. "It's only because you make the best damn cup of coffee,"

"……yeah, yeah." Joe waved Vincent off as he attended to another customer.

"Damn that geezer, it's been almost a cycle, yet he never changes. Guess that's what makes him unique and original." Vincent glanced at the small crowd of regulars huddled in front of the makeshift fireplace and benches.

He brought his nose closer to the cup, took a deep breath, and smiled. "Dammit, I could never get used to it. Every time feels like the first time." He took a sip from the mug. He then took another sip, letting the flavours hit his palate and mingle before swallowing it. "Ahh, that hits the spot." He sighed in relief. Fruity aroma, bitter aftertaste, and……he paused his train of thought and took another sip. Taste a bit like cinnamon? No. Pepper perhaps?

Before he knew it, the cup was empty, and the port was bustling with people arriving for the buskerfest. He began to scan the crowd, and a particular young mother with her two kids caught his eyes. The woman stopped a dockworker and began asking something. From this distance, Vincent could see the dockworker leering down the woman's blouse. The dockworker pointed and gestured with his hands, and the woman nodded. Perhaps she is asking for direction? She must not be from around here then. He grinned slightly at the opportunity.

"Hey brat, you're still two silver short." Joe raised the cezve and pointed it at Vincent.

"Yo! Careful with that thing, you could give burns to some poor unlucky fellow." Vincent replied as he placed another piece of silver nel. "Come on Joe, I was only testing your eyesight. Seems like you still got good eyesight."

Joe scoffed, "Still short a silver and stop leering at that young woman."

Vincent smirked and tossed a silver nel to the pile of nels on the table. "Woman? What woman?" he chuckled.

"This bastard…." Joe grumbled as he waved Vincent off.

Vincent quickly made his way and mingled in with the crowd of people leaving the port. He makes sure not to lose sight of the woman. With her two kids, it makes Vincent's job easier. He slowly walked toward the young woman, squeezing through the crowd. This festival is a fucking gold mine. I could make tenfold from what I used to make in a day. Now I need to find enough starting funds. He then saw the woman break away from the moving crowd of people.

"Mama, mama I want that cake!" the young boy pointed through the shop's glass window at the cake on display.

"Yes, mama, I want one too!" the little girl said in delight. The young mother was powerless as her kids pulled her into the shop. Vincent continued walking past the shop and stopped at another shop a block away. He took out a cigarette and waited for the woman to leave the shop. After around fifteen bits, he saw the woman exit the store with her two kids in stow and their mouth stuffed with cake. She stopped at the sidewalk to place the nels inside and pouch and placed it inside her right pocket.

Vincent didn't realize that he was staring at the woman. The woman looked up and locked eye contact with him. Vincent didn't immediately break contact and pretended that he was looking at someone or something behind her.

"Yo! Over here!" he raised his hand and waved at particularly no one and kept looking at someone or something behind her. The woman and her kids walked past him. He waited until they were a few distances away before merging with the crowd and continuing to follow them.

He could hear the music from a nearby street performer and saw her kids pulling her toward the source. He quickly squeezed and pushed through the crowd and slowly moved behind her. Vincent nudged in closer, disguising the action as crowding by the people watching the street performer. His front pressed up against her back. He could feel her tense up, uncomfortable by the physical contact. As the street performer began his routine, Vincent's hand slid forward, two fingers snaking into the mother's pocket. A quick dip in and felt the tip of the pouch. He slowly pulled the pouch while everyone was distracted by the performer. The performer ended his routine faster than Vincent had expected. He needed more time. All in or go home, he repeated the mantra in his head.

He stepped back, a half step, a half step over from the mother. The side step covered the visual of his arm for the moment. He grasped her left buttcheek with his free hand, giving it a firm squeeze. The woman, startled, yelping, turned to her left to look at her assailant. As she did, Vincent slipped the pouch of nels out of her pocket. A few nels fell to the ground, and using the commotion between the woman and her "assailant", he quickly squeezed his way out of the crowd.

"There you are! I've been looking for you!" A young girl rushed up and hugged Vincent tightly.

"What……" Vincent paused. "Who the fuck are…." Before he could finish his sentence, the young girl looked up at him and grinned awkwardly.

"Oh, I'm sorry, mister. I thought you were my older brother." She chuckled awkwardly as she loosened her grip on Vincent.

"Bye then mister and thank you!" She shouted as she ran and disappeared into the crowd.

"What in the world?" Vincent continued pushing through the crowd and stopped in a nearby alley. While catching his breath, he took out a piece of cigarette.

"Now let's see how many coins-"Vincent stopped and looked at the cigarette in his right hand. Bye then, mister, and thank you….thank you. The young girl's parting remark echoed in his mind. Why would she thank- he paused. "That scheming little fucker!" He shouted and threw his cigarette to the ground. He took a few quick deep breaths to calm his mind. "Well played, brat. Well played." Vincent chuckled to himself. He leaned at the nearby wall and took out another piece of cigarette, and lit it. Crow and Leon would tease me endlessly if they knew I got outwitted by a little girl. Dammit!

"Fuck! "He cursed as the cigarette he was holding broke into two, and embers hit his hand. Re: Buskerfest: A Fated Encounter or Misfortune?

Skill Overplay Consequence (not optional): You overplayed your deception skill pretty heavily here. The woman will find out the guy she first thought had groped her was innocent, and eventually connect the dots to Vincent (who she made eye contact with). As such, he'll be getting a warrant out for him for questioning related to an assault charge, disorderly conduct, and petty theft charge. For more details, see this thread.

Notes: I have to admit, I was a bit confused at times during Vincent's back and forth with the coffee maker, Joe. It seemed to jump from them talking, to Vincent making moves to watch/shadow/follow the woman. But I suppose that's only minor.

I do enjoy the way you get into your pc's perspective, as he goes about his work. Although the way he did his theft was a bit... questionable, and one might even say perverse, it seemed effective in theory. However, given the seriousness with which sexual harassment and sexual assault are taken in Rharnean law, he'll be earning a bit of a heavier sentence should he get tracked down by some enterprising sleuth or bounty hunter.

Still, I have to admire the gutsiness of pickpocketing out in the open. Too bad that little girl at the end rendered his theft profitless.

If you have any questions, comments, or concerns regarding this review, feel free to PM. Enjoy your rewards!