Stronghold of education and learning, this fortress is in one of the coldest areas of Idalos and home to many knowledge seekers in a variety of disciplines. However, unknown to most, below the city are those who suffer for the sake of science. While all are welcome, not everyone will be treated as they expect 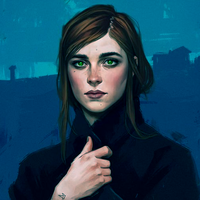 The Devil's Advocate was always a hive of wretches and scholars. It was a place in which one could find the lower, and centermost points of society could be found. A festering ground in which allowed those of common standing and birth to congregate. This evening, however, was a peculiar one. The majority of the bar itself was occupied by students, as evidenced by their uniforms, having very little to no shame in their identity being on display. The men and women were young, no older than twenty one arcs of age, their washed out complexions at home with the typical Videnese look about them. They drank with the lowest that the Malachite Prism had to offer, going against Videnese morals to drink the swill on offer here. They were bound by similar crimes, overlooked by authorities due to how minor it truly was. Prohibition of liquor in these times was like refusing to give a goat grass. They'll go off and eat eventually, regardless.

The establishment was, of course, obviously a place of ill repute. All of the chairs appeared to be misshapen somehow, and all of the surfaces in the main room itself seemed to be covered in slash marks, from a long forgotten brawl, one after the other. One was greeted at the door, with a decree from the Rangers of Viden, declaring that the establishment was not suited for the handling of food, citing illness and negligence as the main cause of the ban itself; the only thing that this place was allowed to sell, would be things that were bought elsewhere, or salted and jerked meats. Everyone knew that the ale was watered down. It was obviously swill, only suited to be quaffed and endured, rather than something to be enjoyed. But it is this balance of alcohol, freely flowing, that allowed such different backgrounds to put aside their differences for a single sitting, for the sake of a brief escape from the harsh life of city living within Viden's walls.

Sybil was sat away from the bar. A chilly section of the tavern, that was far away from the hearth, which only just met the standards for public building safety. A place that few in their right minds would go to, due to the ever present chill that coated everything within reach. But it was a place that welcomed those who were not fit to be among the crowd, those who stood out, to simply blend into the background, watching the goings on. Sybil was drinking from a mug, filled to the brim with cheap, watered down dark ale. Slow sips were taken from the drink itself, idly. The student's attention more upon those entering the tavern itself. Leaning back against the wrought iron chair, the student simply finds comfort from the position, rolling at the shoulders, letting out a soft sigh. Free chairs flanked around the table in which the student sat, making Sybil stick out like a sore thumb.

Something was strange. Sybil's eyes slowly slid across the tavern. The scent of drink was heavy upon the air, as well as vomit. Nothing could really be expected from places like these. They were under the double sided thumb of not only being the result of seedy gatherings, but also their main customer base as a whole were criminals just by partaking. Sybil rested their eyes, as they folded their hands beneath their cloak. It felt like something was about to happen, something that they couldn't exactly understand, but all that was left was a dull empty space. It was odd. One could feel lonely despite being surrounded by so many people. The throng of men and women echoed throughout their mind.

But that's just the way things were. One couldn't be expected to be entertained by the whims of fate. Even in the bustling bar, there was something that was stinging at the stem of their brain. Why was it that they always came here? Why was it that the things that interested them in the aspects of Man, always seemed to come back to this place? It was bizarre. But it wasn't necessarily cruel. They had heard tell of animals being shown off at noble courts, simply for the novelty of being seen. Perhaps this was something similar? Their mind stalled on this topic, as though trying to come up with an answer. Why was it that their curiosity could only be sated in places like these, among the dregs of Man?

A familiar ranting tone of voice could be heard. It was the type of voice that could only be described as moist, interrupted by a furious attempt to wipe something from his lips. The Maggot Connoisseur. They let out a soft breath. The man was ranting nearby. Sybil avoided him like the plague, but that didn't quite help their train of thought. He was most definitely the bottom of the barrel. A man that had lost his mind to the drink, whether it be alcohol or something medicinal that was abused, who was quite literally named after his penchant for eating the maggots that swarmed his mouth. Why wasn't their attention on such a man, if they were interested in the darker truths of mankind?

Perhaps it was because he was too lost.

The notion stirred something within the student. Their eyelids didn't bother opening. They could feel an urchin patting their pockets, though. A light sigh left their breath, as they just tried to ignore it. Sybil wasn't dumb enough to bring any more nell than what was needed for a round or two of drink.

They had heard tell of minds that were blank. That was something that they had been looking into. The basic building blocks of the mind. So why was it that this was something different? The thought lingered longer than what was comfortable.

They could hear his ranting from here.

He was certainly enraptured by fantasy.

To be too lost in the throes of one's own mind was different than being something of a husk. That was something that Sybil understood. The Maggot Connoisseur was someone that had the very basics of their mind corrupted, root and stem, and wasn't likely to make a recovery outside of something particularly miraculous. They could hear it in his voice. While he shouted and riled up people, it was as though he was in a constant state of dreaming. Mercurial switches of the mind dictating his actions, rather than the bastion of rational thought. How does one begin to treat such a person? If he's destined to simply rip down all the progress made up until that point, then the treatments on offer would only be able to treat things temporarily.

If this urchin wouldn't take the hint that their pockets were empty, Sybil swore they'd tell the brat up front.

Perhaps it was time to think of something that was a common thread in his behavior?

That was somewhat of an easy thing. The Maggot Connoisseur swung around a bottle and shrieked his hardest whenever he found someone dumb enough to give him money. Rather than putting it towards bettering himself, or putting his foot into some sort of tavern for the night, he without fail, seemed to cling to the bottle as though it were the lifeline to his very existence. Their lips knit to the side, as they considered it. There was something that was present in his actions. Something deeper. Everyone knew that he was a drunkard that would sell his first born whatever for a pint. That much went without saying. But, what is something that makes him... Trapped, in this cycle? And what could be done?

Tilting their head to the side, their eyes finally open. Glancing around, the crafty bugger was nowhere to be seen. Not that Sybil would have done anything.

The behaviors that follow. That had to be it. He always seemed to be able to get his hands on a bottle. That action in on itself was enough to feed his addiction, and send him down a downward spiral. Sybil didn't fully understand how it was that he managed to get anything that he had. Though one could easily draw conclusions. Thievery, begging, violence. It was all in the cards, especially with how wildly he behaved. Perhaps there was some sort of tactic that he developed that made doing this something that he could actually manage to do on a steady basis. The thought of which, genuine disturbed Sybil. Shaking their head, they tried to wake from the daydream. At this rate, they'd be ranting about the mind like he was ranting about his conspiracy theories.

So Sybil rose to a stand. And began to make their way towards the exit.
word count: 1035
"No mass graves."

Since your partner never showed I just went ahead and graded it like a solo. You managed to wrap it up without it seeming awkward and Sybil got
to people watch and learn some things. I really do love your writing style and enjoy your rewards!

Can be use for magic? Yes or No