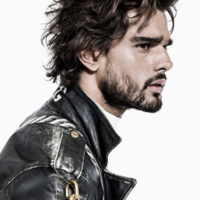 "That's the one" Ryder muttered to the three bandits beside him, all of which close to the roadside. They were hidden, to some degree, though the cloak of night was enough to cover them as much as it could. His scouts had picked up on the armored caravan a trial or two ago, informing Ryder immediately. Not surprisingly to the Mercenary, the caravan was incredibly well guarded. Four armored soldiers alongside it at all times, two light-armored mercenaries following at the back.
"Looks like a challenge" Will admitted, sitting back against a tree behind Ryder and letting out a small smirk. Ryder glanced back in his armor, the helmet not yet on due to the intense heat he felt. Ryder matched the confidence of Will, even trumped it, as they readied themselves for the Caravan to approach. Just a few bits now. Will was a good fighter, though not as good as Ryder was. Very few were, if any, in Ryder's experience. Then again, very few were in charge of a faction like AA and had weapons like Ryder had. Let alone had the history of combat that he did.

Will was one of the few mercenaries that had stood up for Ryder when he first joined Al'Angyryl and had become a target for some of the other grunts. Like Floyd, the man was a part of his group of friends, a group that used to go out a lot more than they did now. It wasn't that the group was distant now, far from it, but what had happened in the battle against the Turkeys was a story that many had heard, and even some knew what change it had made to Ryder. Colder was the word that most used for him. Floyd had been one of the only friends he had in many Arcs, one of the few people that knew what he had been through and was still here. Even in his last moments of battle, he died fighting. He never ran - never. Not if it meant Ryder could keep living.
"I doubt this fight will be hard. Not compared to some of the battles we've seen. But everyone is to stay alert, if these men kill even one of you then this mission wasn't worth it" Ryder ordered them all. When he then glanced again to the caravan that made it's approach, he realized it was time. Time to act, to rush with ferocity against what might be the greatest payoff he had yet to lead, not counting the museum. It was a new plan for the attack, one that the bandit group had yet to use. But this attack was meant to be a statement. Every man for this raid put on a mask they had bought, a small group of AA that Ryder was experimenting with as his own strike force. Today, their faces wouldn't be remembered - but their actions would.

"Positions, now" he nodded, sliding his helmet on and standing beside the road, his Axe drawn and longsword at his side. It was heavy, but the man was strong enough to muster it. He just hoped this fight would end abruptly. If all went to plan it would. One man stood beside him, masked and with a sword drawn. The other two men made their way to the side of the caravan, positioning themselves carefully between a few trees as they readied their ranged weapons. One with a shortbow and one with a crossbow. Both aimed at the targets, the crossbow ready to pierce one of the heavier guards while the last would shoot out a horse, stopping the cart from moving with any level of speed. It was heavy enough that two horses were needed to move it, so killing one would prevent it from escaping. It was a common strategy Ryder used, one that took little thinking.
Raising his hand, Ryder readied himself. Will, stood beside him, put a hand on his shoulder lightly. "For Floyd" he muttered to Ryder, his hand resting on the Executioners chestplate and a small, comforting smile through the mask that covered all but his mouth. Slowly, Ryder glanced back and looked at him, his eyes meeting Will's through the helmet before letting out a small nod. "For Floyd" he repeated under his breath. Just a trill later he let his hand lower, the arrow and bolt flying.

Both connected, the arrow killing the horse immediately as it shattered through its neck and dropped it to the floor. Meanwhile, the bolt had planted itself in the side of the armored man wielding it, shattering the ribs it entered. While he wasn't immediately dead, he was definitely out for the count. As the screams signaled the attack both Ryder and Will stepped out of the shadows, Ryded holding the broad axe in his hands and Will wielding a longsword beside him. While Will could run off ahead, he stayed beside Ryder, the two fighting as a pair. It was hard to move so quick in the armor that Ryder had on, though the protection was admittedly useful to have.
As the two made their approach they were immediately spotted by the three armored men left standing. While the man armed with a shortbow drew a sword and ran to assist the others, the crossbowman fired another bolt. This one pierced through the shin of the armored men and took him to the floor, screams filling the air. Four men were left standing, two heavily armored while the other two were lighter. "The big ones are mine. You two deal with the rest" he ordered, Will nodding and running around the bigger men to deal with the rest. Both men, wearing plate mail, pierced through Ryder with their gaze.

"What are you supposed to be, the Prince of Eternal Assholes?" one of the two men taunted. Ryder let out a small smirk and dropped his axe. He had yet to use it, but that was because he wasn't as good with it as he was a sword. These men were to be his first, but such puny men weren't worthy of being the first to be Executed. Not today. Ryder drew his longsword, the crimson red blade showing to the men and the Diri giggling in Ryder's head with joy and delight. "That's my Ryder. Kill them, all of them. Show them how powerful you truly are" it whispered in to his ear, the thoughts of bloodshed running through him like a desire.
As one of the men rushed forward, Mace in hand, Ryder sidestepped and stabbed at his neck. Despite the armor coating him, the Diri and Adamantite blade meant he pierced through a small chink in it, the blade driving right through his neck and near to taking his head clean off. "Like a hot knife through butter" Ryder taunted under his armor, pulling out the blade and looking to the man as his friend dropped to the floor with a loud metal thud. Behind the caravan, the two AA men had beaten down one, and before the other could run away he had been shot through with a bolt.

"Bastard!" the opponent cried out before charging at Ryder, as fast as he could in thick plate mail. Ryder readied for another strike, this time wanting to make it last longer. All of this fight had been slow, not one that would be remembered. Besides, these men were going to have one survivor. One to tell everyone of Al'Angyryl and their power, the influence they had. This man would remember Ryder, the Executioner of Al'Angyryl. Everyone would remember him, one day. Those who stood against him with fear, and those who stand with him and who he saved - with love. Either way, though, they would know his name.
Ryder raised his hand to block the incoming axe, sidestepping and using his plate armor to stop the shaft, the head of the axe just behind his shoulders. As he ducked under the blow his longsword plummeted in to the mas shin and shattered a bone, the force of it alone doing intense damage to the man, a scream shattering the air around. Them. Ryder withdrew the sword, before lifting the mans helmet off and slamming his fist in to the guys head, causing him to drop to the floor in agonizing pain. Slowly, the man caught his breath, the heavy Al'Angyryl armor making it hard to work like he was used to. Leather armor was light, let you move quickly. While it wasn't as much of a statement as this Plate Mail was it was definitely nicer to fight with, in the bandits opinion.

"Check inside" Ryder orders, pointing to the heavily reinforced caravan. After a few trills, Will came out with a small man, throwing him to the floor as he kicked and screamed, shouting what Ryder could only assume were curses in another language. "Do you know who I am, boy! I am a member of the renowned Seekers. You will unhand me at ONCE!" he snapped, staring at Ryder who was clearly the leader of the two. The Executioner let out a small sigh.
"Gag him and take him away. We need information on what they are transporting in such heavy carts. If he struggles, break a bone or two"" Ryder ordered sharply as the man was dragged away by his men. His attention then turned to the guard on the floor, a smirk on his face as he knelt down beside him and looked him dead in the eyes, his armor's red glare piercing the mans own.

"Tell them Al'Angyryl came, tell them we took everything - and tell them that the Executioner is coming."
word count: 1653
"The most dangerous people in the world are not the tiny minority instigating evil acts, but those who do the acts for them" ~ Suzy Kassem
Top

I think what I enjoy most about your threads with Ryder is that he is at once utterly ruthless and yet incredibly loyal and also - there's a very real sense of morality about him, too. That speaks to me of a complex pc who is very well written. There is no doubt of his loyalty to all those angry elves, either. Lovely writing, well done!

Renown: 10 (I don't think this is 15 points really, looking at the examples?)

Personal haul of 180gn worth of jewelry and gemstones.